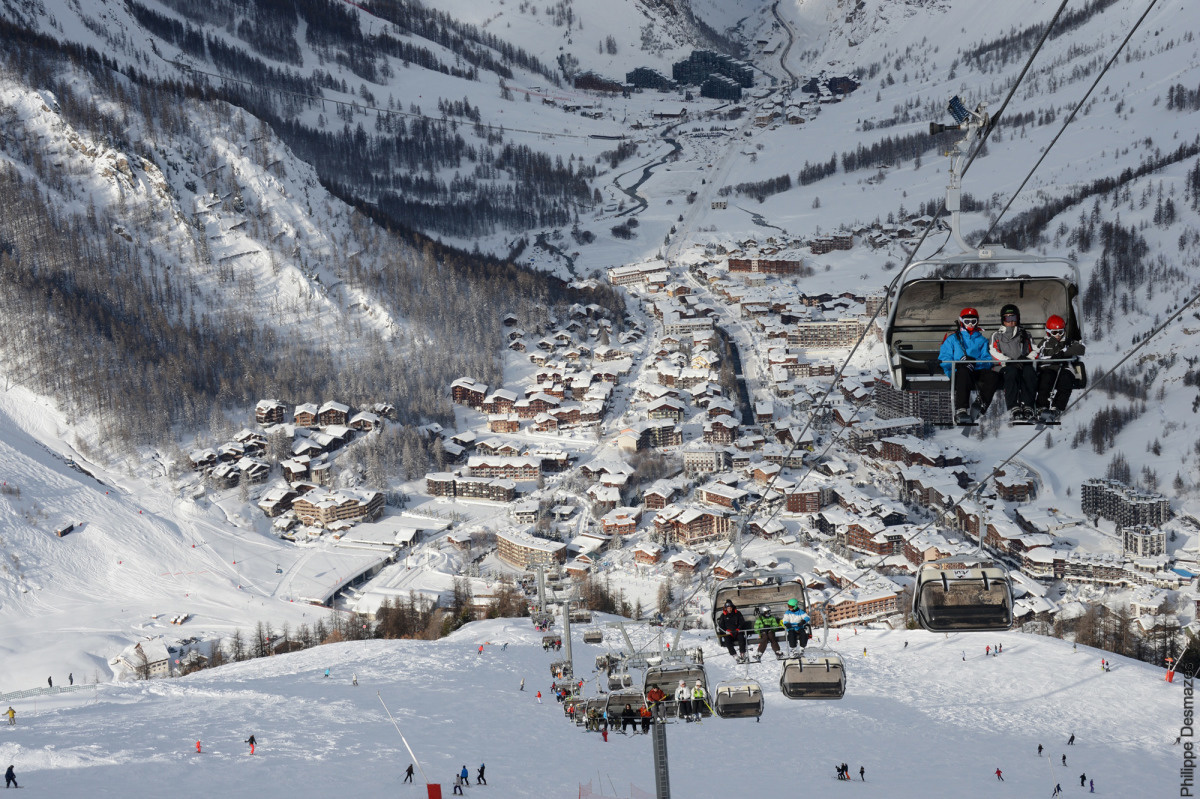 This resort guide to Val d'Isere gives an overview of the ski area, the restaurants, the après ski scene and also the many nightlife options available to those that choose to take their ski holiday in this fabulous Espace Killy region ski resort.

Although Val d'Isere and the surrounding valley has been inhabited since the pre-Roman era, it was not until after World War I and the construction of the Iseran road that the resort was able to develop into the world class skiing Mecca it is today. The pioneering efforts of Jacques Moufflier, Charles Diebold and Nicolas Bazille spurred on the resort's development and in 1940 Val d'Isere's first cable car, the Telepherique de Solaise, was installed. Post World War II construction improved access roads and allowed the village to convert itself into a fully functional ski resort. The resort extended laterally with the installation of the La Daille Gondola and the cable car at Le Fornet. The link with neighbouring Tignes was created in 1972 and the famous Espace Killy ski region was born. The late 1980's saw Val d'Isere undergo a major facelift in the build up to the 1992 Winter Olympics which vastly improved the look of the centre of the resort.

Val d'Isere retains much of its village charm. The local parish church named after Saint Bernard of Menthon, the patron saint of mountain dwellers, was built in 1664 and stands at the heart of the 'old town'. The modern lifts and gondolas include the high speed Olympique Gondola which whisks skiers straight up into the heart of the Espace Killy and the Le Fornet cable car provides lift access to some of Europe's premier powder skiing terrain. The resort is quintessentially British during the winter months with English rather than French seemingly the predominant language but mainstays like the Maison Chevallot bakery and Brasserie 1789 help the resort keep its French cultural roots alive.

Val d'Isere is widely acclaimed to be one of the top resorts in the world, with one of the best snow records in Europe. Linked with neighbouring Tignes, there are over 300km of pistes, vast areas of off piste and skiing as high as 3,000m altitude. Don't be misled into thinking Val d'Isere is just for experts as there are an enormous number of wide, gentle pistes for intermediates, and for novices the excellent nursery slopes in the centre of town are free. The ski area boasts one of the most efficient lift systems in Europe and even at the busiest times of the year, queuing is hardly ever a cause for concern.

Après ski ranges from a quiet drink in the Hotel Blizzard, to a 4am finish at Dicks, with everything in between. With a growing list of fine hotels there are plenty of fine dining opportunities in Val d'Isere. The two Michelin star Atelier d'Edmond in Le Fornet is much celebrated and the restaurant at the Barmes de L'Ours Hotel is almost as good.


Check out our resort guide video for Val d'Isere. Every year it is our most popular resort - with its architectural charm, massive après ski scene and easy access to the Espace Killy ski area it's easy to understand why.

View all our chalets in Val d'Isere

View all our hotels in Val d'Isere

With over 50 restaurants in Val d'Isere town (let alone those on the mountain) there is a full spectrum of culinary options on offer for either lunch or dinner at resort level. From the Atelier d'Edmond with its Michelin star to value pizza and fondue joints there is something to suit all tastes and budgets. See link to resort level restaurants of Val d'Isere in our 'Popular searches' above (for a more detailed selection of preferred dining options at resort level in Val d'Isere).

For such an upmarket resort, Val d'Isere has a great range of reasonably priced mountain restaurants. There are lots of big self-service places with vast terraces at the top of most of the major lifts which offer good value for money. However, there are also tucked-out-of-the-way smaller restaurants which offer a high grade of cuisine and/or individual flair. The Peau de Vache on the Bellevarde Mountain is an example of the latter type of eaterie. See link to the mountain restaurants of Val d'Isere and Tignes in our 'Popular searches' above (for a more detailed selection of preferred on-mountain dining options).

Val d'Isere leads the way in France as a rival to the party ski resorts of Austria and Switzerland. The creation of the hugely successful Folie Douce kicked the apres ski party scene off in Val d'Isere and more lately Cocorico's, at the base of the slopes returning from the Solaise Mountain, has taken on the batten. L'Etincelle which is not far from Cocorico's at resort level offers a more refined but no less popular brand of apres ski. See link to the best apres ski in Val d'Isere in our 'Popular searches' above (for a more detailed selection of preferred party spots in Val d'Isere).

The nightlife in Val d'Isere for the Brits is all about the famous Dicks T - Bar. DouDoune is the new nightclub just off the Rond Point des Piste area of Val. It's absolutely huge attracting well known DJs and artists often putting on big events till 6am. The Petit Danois is a good alternative with excellent lively music and pitchers of Red Erik. Cafe Face is also great often with live music and singers from the Folie Douce. Moris Pub has a great Open Mic night on a Monday well worth popping down to. The club called Le Graal, just off the main high street is predominantly a French hang out. For a quieter evening away from your chalet, Val d'Isere's Lodge is cosy and there are a variety of other sophisticated hotel bars, piano bars and cocktail lounges.